Another strain of the Avian Influenza has hit some farms in Bediako, a community in the Nmlitsakpo Electoral area in the Kpone-Katamanso Municipality of the Greater Accra Region. 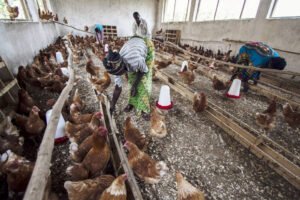 Confirming the outbreak to the Ghana News Agency, Dr Emmanuel Kwao Pecku, KponeKatamanso Municipal Veterinary Officer, stated that the outbreak of the H5N1 subtype was ravaging poultry birds in the municipality.

He noted that the situation was having some dire repercussions on the farmers within the municipality stressing that lots of long-time investments were going down the drain without any form of assurance from key stakeholders.

Dr. Pecku mentioned that about five poultry farms were hit with the Avian Influenza flu this year alone adding that there were some reports of poultry farmers who did not report the outbreak in their farms to the Veterinary Unit in the Municipality.

The Municipal Veterinary Officer again stated that communities such as Bethlehem, Kakasunaka No.1, Saki, and Bediako had recorded cases of the bird flu within the KponeKatamanso Municipality.

Dr Pecku urged poultry farmers to pay critical attention to their poultry birds saying the farmers must put in security measures to ensure their birds were safe at all times.

He called on the government and the Kpone-Katamanso Municipal Assembly to put in plans to curb the spread of the bird flu into other farms within the municipality.

Dr. Pecku explained that due to the zoonotic nature of the outbreak poultry farmers should prompt the veterinary officers when they suspect a possible outbreak in their farms to save other birds from being affected.

Names of the affected poultry farms in the Bediako Community were currently been withheld
pending an investigation to ascertain the level of devastation.