Russia has captured its first major city in Ukraine after a week of fighting, with Kherson – a regional capital of 300,000 people on the Black Sea – now under the control of Putin’s forces.

Igor Kolykhaiev, the city’s mayor, said in an update around 1.a.m that ‘armed visitors’ had stormed a council meeting and imposed new rules including a strict curfew and urged citizens to follow them. But it was far from clear whether Ukrainian forces had totally withdrawn, with the UK MoD saying Thursday the situation is ‘unclear’.

If Kherson is under full Russian control, then it opens up Odessa – Ukraine’s main port city and primary naval base – to an assault. Amphibious landing ships were seen forming up off the west coast of Crimea Thursday morning as US officials warned a major assault from the sea could come later in the day.

Meanwhile Kyiv and Kharkiv, Ukraine’s two largest cities, remained under a heavy bombing campaign overnight with missiles striking civilian areas – including a train station in the Ukrainian capital being used to evacuate people from the city and as a shelter for those who cannot or have chosen not to leave.

Chernihiv, in the north west, and Mariupol, in the south, also remain under Ukrainian control despite being all-but surrounded by Russian forces and coming under heavy bombardment. The mayor of Mariupol said Thursday that Russian artillery fire has been so intense that they cannot even remove wounded people from the streets.

Vadym Boichenko accused the Russians of doing ‘everything to block the exit of civilians’ including blowing up the city’s trains, leaving people stranded before the artillery opened fire. Evacuations continued elsewhere, however, with the UN estimating that 1million people have now fled Ukraine into neighbouring countries.

Ukraine estimates that 2,000 civilians have been killed in fighting. The UN has confirmed 227 of those but said the true toll is likely far higher. War crimes prosecutors have opened a case into the deaths.

Negotiators from both Ukraine and Russia are set to meet on the border with Belarus today for a second round of talks, after an initial summit on Monday failed to yield any result.

Volodymyr Zelensky, the Ukrainian president, issued a video address to the nation in the early hours of Thursday, giving an upbeat assessment of the war and calling on Ukrainians to keep up the resistance.

Zelensky did not comment on whether the Russians have seized several cities, including Kherson. ‘If they went somewhere, then only temporarily. We’ll drive them out,’ he said.

He said the fighting is taking a toll on the morale of Russian soldiers, who ‘go into grocery stores and try to find something to eat.’ He added: ‘These are not warriors of a superpower. These are confused children who have been used,’ while giving the death toll at 9,000 Russian troops. The US believes the toll is actually around 6,000. Moscow has admitted only 500 deaths.

His assessment of the Russian attack was shared by several US defence analysts who said the campaign had been mismanaged, under-supplied, ineffective, and led to Moscow suffering much-higher casualties in the first few days of fighting than had been anticipated.

Ahead of the invasion, Washington had warned that Russia’s superior forces would be able to quickly overwhelm Ukraine’s 200,000-strong army – taking out air defences, achieving superiority in the skies, and then raining death down on those below.

But none of that has come to pass. Ukraine’s skies remain contested, US intelligence says, while attacks have been piecemeal with troops under-supplied and not fighting in a coordinated fashion, leading to large numbers of dead along with some abandoning their vehicles which have then been captured.

‘This is a colossal intelligence failure that vastly underestimated Ukrainian resistance, and military execution has been terrible,’ Michael Vickers, former US Under Secretary of Defense for Intelligence, said at the Center for Strategic and International Studies.

‘[Putin’s] main attack has been underweighted. It’s been piecemeal. His reconnaissance elements have been captured, columns have been destroyed,’ he said. ‘It’s just a disaster, through and through.’

But many caution that Russia’s initial failures could simply pre-sage a secondary phase of the fighting in which it uses superior numbers and force of arms to surround and bomb Ukrainian troops into submission, causing large civilian casualties.

Yves Le Drian, the French foreign minister, agreed with that assessment today as he issued a warning that the ‘worst’ is still to come as Russia switches to a ‘logic of siege’ with major cities in danger of being surrounded.

He spoke as Europe continued to step up its assistance to Ukraine, with Germany pledging another 2,700 anti-aircraft missiles to bolster the Ukrainian defences. That comes on top of 1,000 anti-tank weapons and 500 Stinger anti-aircraft weapons it has already sent, in a stunning reversal of its long-standing pledge not to supply weapons.

Meanwhile a Bangladeshi sailor was killed in an attack on his vessel in the Ukrainian Black Sea port of Olvia, the state shipping company said Thursday.

The Banglar Samriddhi, a bulk carrier, arrived in the country on February 22, a day before Russia invaded, and has since been unable to leave.

ijush Dutta, executive director of the Bangladesh Shipping Corporation, said the vessel was hit in a ‘rocket or bomb’ attack on Wednesday – though it was not clear who had opened fire.

The third engineer was killed and the bridge caught fire, he said, but the remaining 28 crew – all Bangladeshis – were still on board. ‘The fire has been brought under control,’ he added. ‘Other crew in the ship are safe.’

In the early hours of Thursday a huge explosion rocked Kyiv – preceded by the blaring of air raid sirens at around 2am local time in multiple districts across the city. Kyiv’s buildings were then lit up by a huge blast from a bomb.

Footage from the capital, filmed from windows overlooking the city, showed at least one massive explosion that lit up the night sky, and appeared to cause a shock-wave. 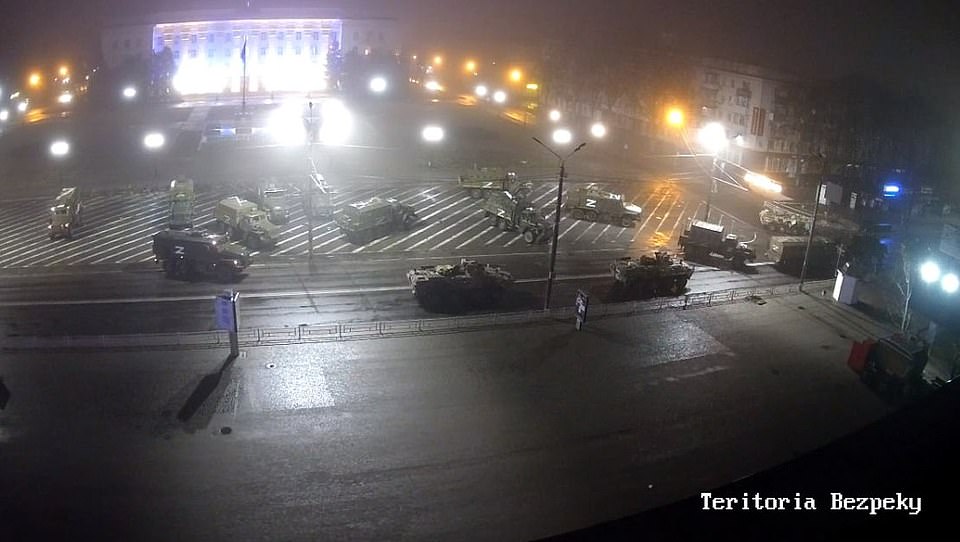 Previous articleCountries With The Most Powerful Military Drones In The World
Next articleRussia-Ukraine crisis Live: Talks between Russia and Ukraine underway in Belarus