Christian Council Chastises MPs: We Voted For You To Engage In Debate Not Boxing

The Christian Council of Ghana has criticised legislators for the fisticuffs witnessed on Monday during voting to pass the controversial 1.75% Electronic Transaction Levy.

The chamber turned chaotic as MPs pushed, shoved and punched each other during the heated exchanges that have since been condemned by many observers.

The latest body to comment on the matter is the Christian Council of Ghana, as it urged legislators to exercise restraint and avoid getting physical during debates.

“We respectfully remind parliamentarians that debates in parliament must remain a platform for the exchange of ideas and not an opportunity for confusion and hostility. Ghanaians voted for you to engage in “debate not boxing,” the Christian Council said in a statement.

The clergy further urged leaders to put in measures to prevent such occurrences in the future.

In a statement issued on Monday, the chairman of the Christian Council,  Rt. Rev. Prof. J.O.Y Mante, emphasised, “Our country’s lawmakers must show the way to protect and deepen democratic processes in our governance system. Unfortunately, what we saw in parliament is a negation of Ghana’s democratic gains over the past thirty years”.

The Christian Council of Ghana entreated legislators to desist from acts that will erode the democratic gains chalked by Ghana for decades.

“We, therefore, urge parliament to, as a matter of urgency, build consensus to ensure that the nation has a budget to work with in 2022. We also urge the leadership of parliament to put measures in place to prevent any future incidence of mayhem,” they added. 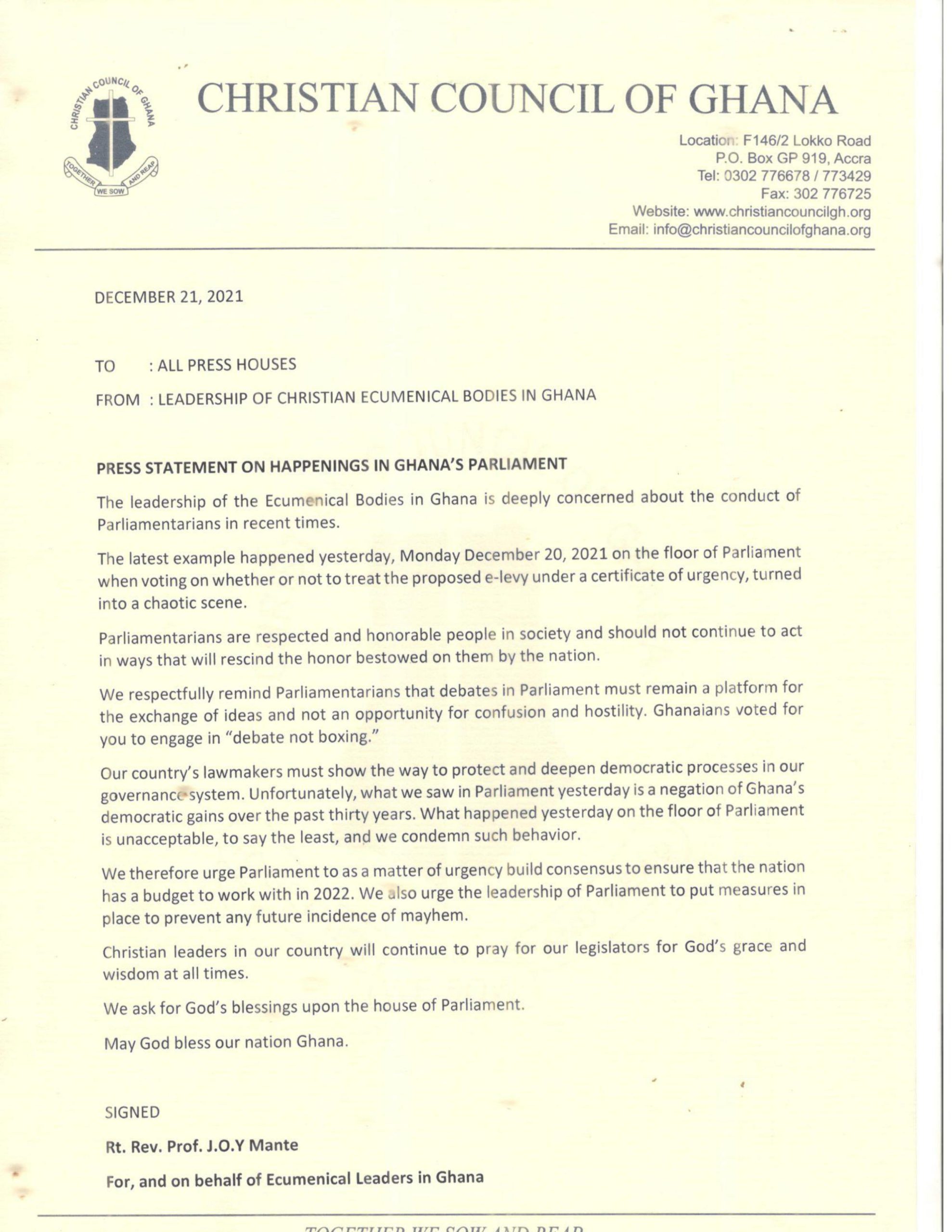 What happened in parliament?

The decision of the First Deputy Speaker, Joe Osei Owusu, to take leave of the Speaker’s chair for the Second Deputy Speaker Andrew Asiamah to take charge to enable him to participate in the voting occasioned disagreement from the Minority, and a subsequent tussle over the Speaker’s sitting area ensued.

The Minority MPs moved to block him from voting because they believed he was not entitled to vote as the acting Speaker during the debate.

The brawl saw dozens of the opposition parliamentarians exchange fisticuffs with their colleagues on the majority side while some officials of parliament tried to protect the Speaker’s seat and the mace of parliament from being attacked.

However, calm returned moments after, before the Second Deputy Speaker, Andrew Asiamah, adjourned the sitting.

The Minority had rejected the levy citing the economic burden on Ghanaians.

And so, at parliament’s finance committee, there was a split vote of 12 for each side until the chairman cast the decisive vote in favour of the proposal.

If approved, the proposed will be charged on mobile money and other electronic transactions that exceed GHC100 per day.

This is aimed at boosting domestic tax mobilisation efforts for infrastructure needs to accelerate economic transformation.

Finance Minister Ken Ofori-Atta believes the new move is the “greatest opportunity to, in the medium term, broaden the tax base and meet the Tax to GDP ratio of 20% as pertains among our peers.”

The levy is expected to replace road tolls collected at various booths across the country.

Mr Osei Kyei-Mensah-Bonsu, the Majority Leader in Parliament, has since apologised to Ghanaians on behalf of MPs for the melee that ensued.

“It is a very shameful and embarrassing moment for us in parliament. And I think all of us must be bowing our heads down in shame for this gross deliration of responsibility, and we must apologise to the people that we represent in parliament,” Mr Kyei-Mensah-Bonsu stated at a press briefing on Tuesday in Accra.

He urged members of parliament to resist the urge of always getting physical and should rather have the emotional intelligence to deliberate on issues.

He also explained that proceedings on Monday which were supposed to start at 1000 hours was delayed, “as the Finance Committee was programmed to have a meeting at 1000 hours for us to be able to have a sitting at about 1200 hours.

He said the adjournment was necessary to calm tensions.

“If we take an adjournment, it will allow cooler heads to come back to this House, and we
can then come back to continue the transaction of business in a much more civil environment.”