Top 10 Ghanaian Footballers of all Time

Many Ghanaian footballers have come through the ranks to leave their mark in the beautiful game, but who is the best of the best? Ace Football takes a look.

Ghanaian footballers rank among the very best talents that Africa has ever produced in history.

The national team, affectionately called ‘the Black Stars’, is one of the most successful sides of the continent. It has boasted an impressive haul of talents across the years. Several trophies and awards have come along the way as well, including four Africa Cup of Nations titles.

This West African powerhouse has produced some truly outstanding players, but who would you rank as the best of the best? In this feature, Ace Football has a go by profiling the 10 greatest Ghanaian footballers in history.

The 36-year-old striker is the national team’s most capped player and record goal scorer. His 51 goals in 109 appearances helped Ghana qualify for the 2006, 2010, and 2014 World Cups. He twice won Ghana’s Player of the Year award and got a Ballon d’Or nomination in 2010.

While perhaps harshly remembered for missing a decisive penalty in the 2010 World Cup quarter-final defeat to Uruguay, Gyan is, without a doubt, one of the finest goal scorers from West Africa.

He is currently without a club after memorable spells with the likes of Udinese, Rennes, Sunderland, and Al Ain. 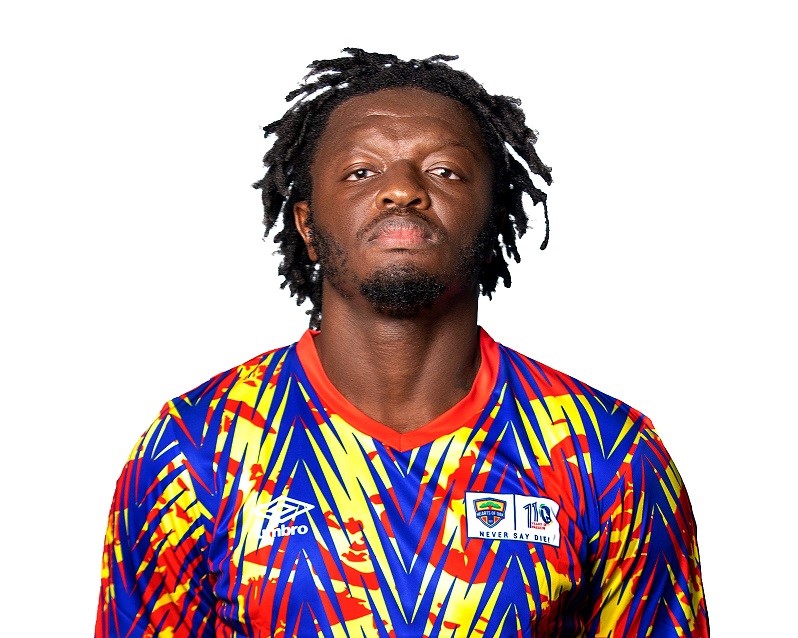 The 37-year-old former midfielder is amongst the most decorated Ghanaian footballers of all time.

Sulley Muntari won everything in Italy during a glorious stint at Inter Milan between 2008 and 2012. He helped the Nerazzurri claim eight major trophies, including back-to-back Serie A titles and the Champions League. He also memorably won the FA Cup with Portsmouth in 2008.

Unsurprisingly, Muntari is one of the most capped players in the Ghana national team’s history. He scored 20 goals in 84 appearances, representing the Black Stars in three World Cups. He is currently playing in the Ghana Premier League for Accra Hearts of Oak. 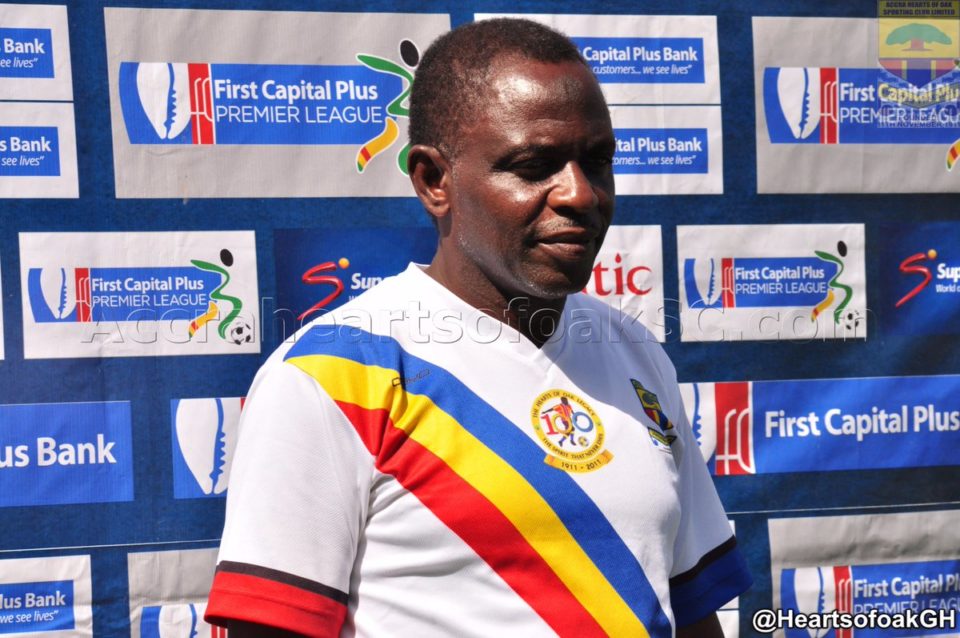 Known as the ‘Dribbling Magician’ and for rating himself as better than Lionel Messi at his peak, Mohammed Ahmed Polo was one of the most technically gifted Ghanaian footballers ever.

The former winger spent the bulk of his career with Ghana Premier League side Hearts of Oak across three spells between 1973 and 1992. He later coached the club twice briefly.

Polo only played outside of Africa once, in a five-year spell in Dubai at Al Wasl from 1979 to 1984. He became an instant hero for fans, dazzling them with his skills from day one. Even now, almost four decades later, he is still fondly remembered.

In 1975, Polo became the inaugural winner of the Ghana Player of the Year award before helping the national team win the Africa Cup of Nations three years later. 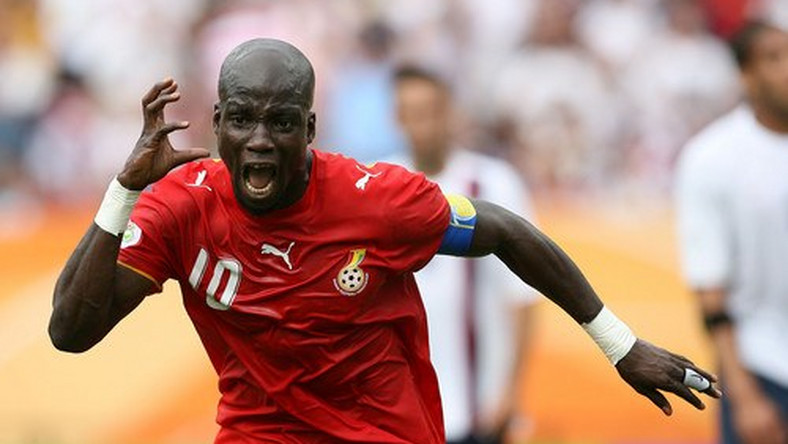 The former midfielder won plaudits for his versatility, work ethic, and physical attributes across a stunning career.

After starting out at Ghanaian side Hearts of Oak, Stephen Appiah made his mark in Italy. The Accra-born star played for Serie A clubs Parma, Brescia, Juventus, Bologna, and Cesena. He won two domestic cups and experienced the Champions League, while also helping Fenerbahce win the Turkish Super Lig in a three-year stay.

The two-time Ghana Footballer of the Year captained the national team to its first World Cup in 2006 and again four years later in South Africa. The former Werder Bremen star had the honor of becoming the first African to play in the German Bundesliga, as well as being the first Ghanaian to win the African Footballer of the Year in 1971.

Ibrahim Sunday’s career in Europe, though, never really took off. He spent most of his time in Germany on the bench, instead enjoying most of his club success in Ghana at Asante Kotoko.

The ex-winger, however, couldn’t replicate his individual triumphs to the national team. He came close twice by reaching two AFCON finals, only to suffer defeat in both.

The International Football Federation of History and Statistics (IFFHS) acknowledged Sunday as one of the 50 greatest African footballers of the 20th century in 2010. 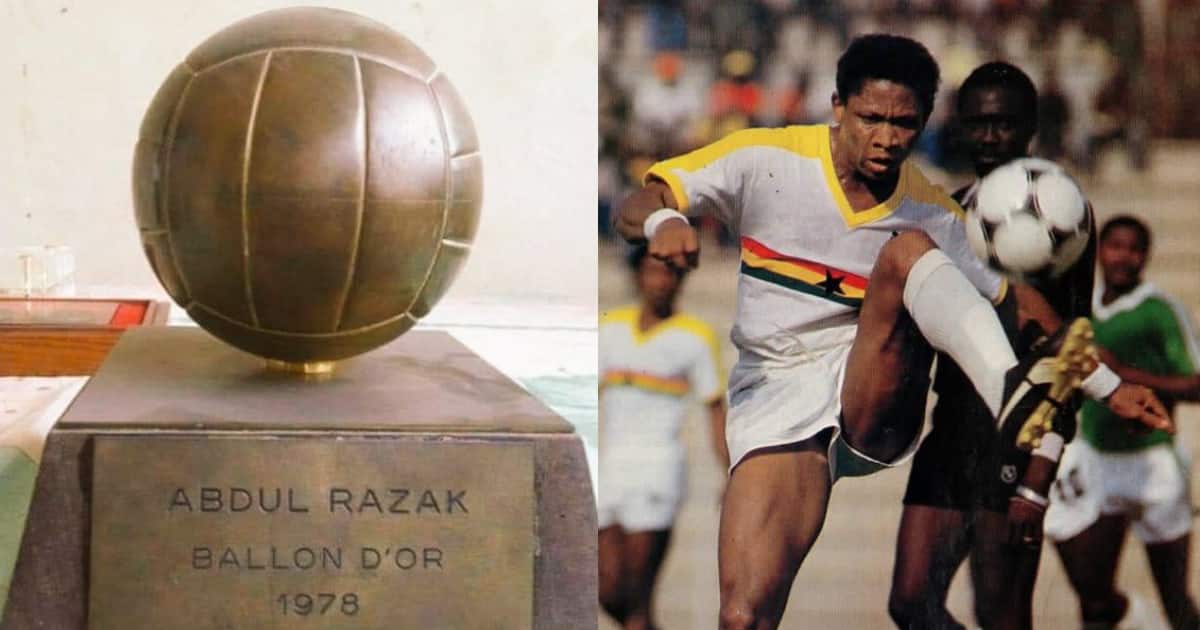 Karim Abdul Razak is one of the greatest Ghanaian footballers who won the 1978 AFCON.

The former midfielder, nicknamed ‘The Golden Boy’ in his career, became the second Ghanaian to win the African Footballer of the Year, four years after Ibrahim Sunday’s first and only triumph.

Razak spent most of his playing days at Ghanaian side Asante Kotoko, but he did venture out to the United States in 1979 for two years to link up with World Cup winners Franz Beckenbauer and Carlos Alberto at New York Cosmos.

The 70-time capped Ghana international also made the cut as one of the Confederation of African Football’s 30 greatest players in 2007, as well as making the IFFHS’ list of greatest African footballers of the 20th century. 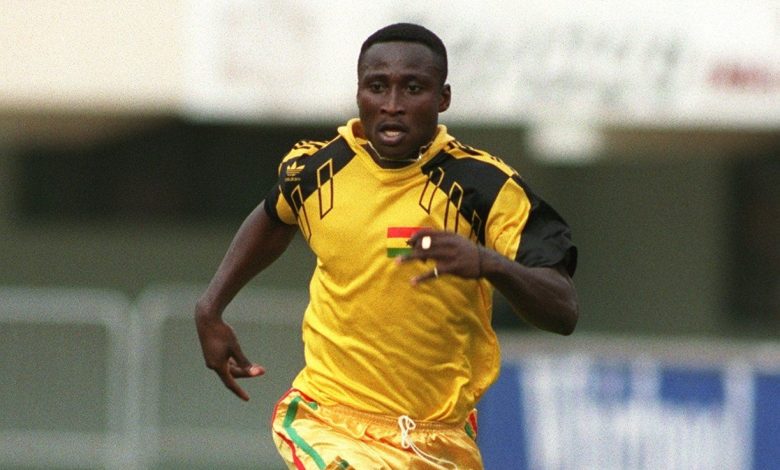 The former striker became quite the cult hero in a two-year spell at Leeds United, winning the club’s Player of the Year in his second season and scoring some memorable goals at Elland Road.

Tony Yeboah also had prolific spells in Germany with Eintracht Frankfurt and Hamburg. He even won back-to-back Bundesliga Golden Boot awards with the former between 1993 and 1994. Nicknamed ‘The Bison’, Michael Essien was renowned for his energetic and aggressive displays. The versatile Ghanaian was the full package, capable of playing in midfield and defense.

Essien first made headlines in England by joining Chelsea from Lyon in 2005 for a then club-record fee of €38 million. He became a key member of the Blues and Ghana squads. However, injuries took their toll and forced him to miss out on big events like the 2010 World Cup.

That said, Essien still won four league crowns and seven domestic cups in Europe. The former midfielder tasted Champions League success with Chelsea in 2012 and had a loan spell at Real Madrid. He also won Ghana’s Player of the Year in 2008.

Famed for his sheer physical strength, Samuel Kuffour became a household name in Europe and Africa.

The former defender spent 12 years plying his trade at Bayern Munich, making 277 appearances. He won 14 major honors in Germany, including six Bundesliga titles and the Champions League. His performances led to three Ghana Player of the Year awards in 1998, 1999, and 2001.

The two-time African Footballer of the Year runner-up won 53 caps at international level. Unlike at Bayern, though, he couldn’t win any major silverware with Ghana. He retired in 2010 after brief spells in Italy, Netherlands, and in his homeland.

The Confederation of African Football proclaimed Kuffour as part of the top 30 African players of all time in 2007. 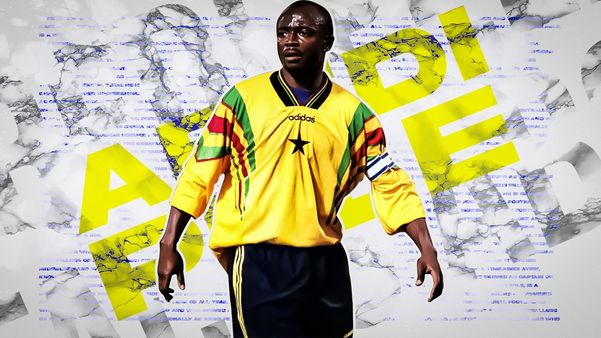 The three-time African Footballer of the Year tops our list of the greatest Ghanaian footballers of all time.

Abedi Ayew, known as ‘Abedi Pele’ in his career due to his similarities with the Brazilian icon Pele himself, is regarded as one of Africa’s finest players following a terrific career at club and international level.

The ex-Marseille and Lille midfielder enjoyed brilliant success in France, winning the Champions League and two Ligue 1 titles. He was twice nominated for the FIFA World Player of the Year award, finishing as high as ninth in the 1992 poll.

The IFFHS has named him as the third-best African of the 20th century, while Abedi is also the only Ghanaian to make the cut in the FIFA 100.